FH –> fault/mutation in LDL receptor –> half the LDL receptors don’t work properly (most common form) –> LDL cannot be taken into cells efficiently –> LDL builds up in the blood –> LDL is deposited in the artery walls (cardiovascular disease) –> blocking the blood supply –> causing heart attacks, strokes and other circulation problems

What is Familial Hypercholesterolaemia (FH)?

Familial hypercholesterolaemia (pronounced hyper-cholesterol-ee-me-ah) usually called FH for short, literally means ‘families with high cholesterol’. FH is an inherited disorder, which means it is passed down from parent to child and often FH (or early heart attacks/death) can be traced over several generations. See Typical family tree.

FH causes very high LDL cholesterol (‘bad’ cholesterol) from birth and will continue throughout life unless diagnosed and treated. This results in an increased risk of cardiovascular disease, specifically coronary artery disease (disease of the arteries of the heart) at an early age.

People without FH tend to start getting high LDL cholesterol in middle age and take several decades to develop coronary artery disease. If you have FH this process starts at birth and means you can develop coronary artery disease as early as your 20s and 30s. When you have FH, heart attacks at such a young age are not uncommon. Sometimes these heart attacks are fatal.

Early diagnosis and treatment of FH can delay or prevent cardiovascular disease and early death.

How common is FH?

In certain groups of people, such as Afrikaner, Christian Lebanese, Tunisian, French-Canadian or Ashkenazi Jew, the incidence of FH may be higher still.

Why do people with FH have high LDL cholesterol?

Normally LDL cholesterol is moved from the blood into the liver by LDL receptors, which can be thought of as ‘doors’ (Figure a).

For people with the most common form of FH, half these LDL receptors (the ‘doors’) in the liver do not work properly. This means the LDL cholesterol cannot be moved efficiently from the blood into the liver causing the LDL cholesterol to build up and over time deposits in the artery walls causing atherosclerosis (Figure b). 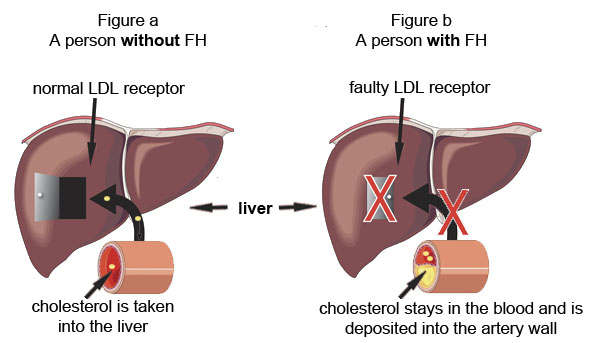 How is FH inherited?

A gene is the unit of hereditary which carries information from parent to child. We are interested in the gene which carries the instructions on ’how to make an LDL receptor’.

In FH the gene which makes the LDL receptor is ‘faulty’ (or is said to have a ‘mutation’). This means the LDL receptors are made incorrectly and can’t move LDL cholesterol from the blood into the liver.

How did I get FH? (most common form) 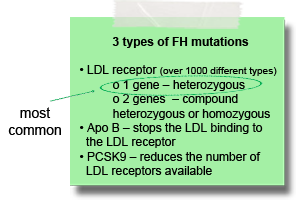 You inherited one ‘faulty’ LDL receptor gene from one of your parents, so 50% of your LDL receptors don’t work; you have heterozygous FH.

I have heterozygous FH, will my child/children have FH?

The same way you inherited FH so will your child/children.

You have one ‘faulty’ LDL receptor gene (F) and one normal gene (N).

There is a 50% chance that any child will get the ‘faulty’ LDL receptor gene (F) i.e. if you have 4 children, two are likely to have FH.

FH is an autosomal dominant disorder which means if you have the ‘faulty’ LDL receptor gene you have FH.

If you inherit two ‘faulty’ LDL receptor genes from both of your parents (both parents have FH), then none of the LDL receptors work.

If the two ‘faulty’ LDL receptor genes are:

*There are over a 1,000 different types of LDL receptor mutations.

Read a personal story – One in a million

FH can often be traced over several generations. 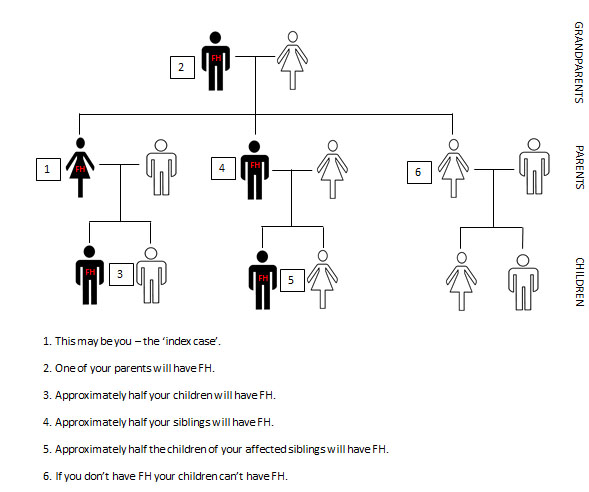 The advice in this website does not replace advice from your GP or healthcare provider.